Somberly, 2022 a year like no other for our 11thFrame.com group at the USBC Open Championships 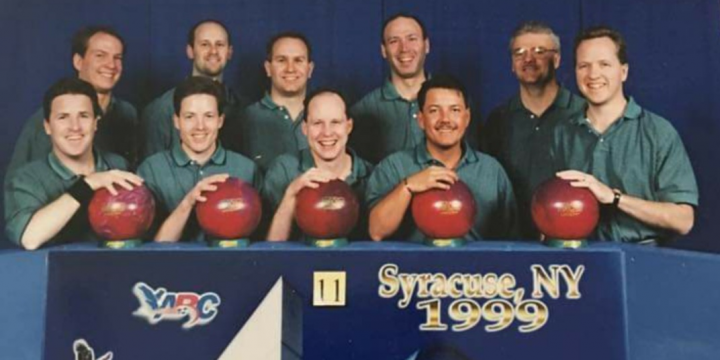 Considering what has happened on our way to South Point Bowling Plaza in Las Vegas this week, I won’t be shocked if something more happens to our 11thFrame.com teams between the posting of this story and our team event at 2 p.m. Friday.

Assuming nothing more happens, we will compete without five of the players we competed with in the 2021 Open Championships.

John Wittkowske knew he was going to miss this year with us because one of his daughters is graduating from TCU this weekend, and he and Bret Faulkner competed last month with what we call the “Wittkowske family teams.” Those two teams plan to be back to make us a 4-team group again in 2023, which will more than double our fun and might require Reno to add more craps tables downtown!

We couldn’t switch our dates earlier because Marc McDowell turns 60 on Thursday and that means he loses his status as a PBA Tour champion, enabling him to return to our group to bowl with our first team and doubles with Mike Shady again. And we weren’t switching our dates later, because almost no one in our group wants to bowl later than mid-May.

Mac being eligible to return meant that at one time we were expecting to have 11 bowlers for 10 spots and facing a difficult decision. Our decisions soon switched to finding enough bowlers.

Mike Walters tore his bicep during last year’s tournament and after barely finishing doubles, he skipped singles. Wally rested for months, tried to bowl and couldn’t, and has repeated that multiple times since. Eventually, he bowed out for this year to avoid possibly leaving us hanging, which he would have as he still hasn’t been able to bowl.

While Wally was figuring out whether he could bowl, Steve Richter informed us that he was getting married on Friday, May 13 in Sheboygan and wouldn’t be able to bowl. Their first thought had been getting married in Vegas as part of the Open Championships trip, but having family that couldn’t travel vetoed that idea. Then trying to schedule something that worked with an available church in a post-pandemic world where church weddings have been backed up massively led to May 13 or many months later.

We told Steve and Kristin to go for it, and we’ll be at the party they are planning for July to celebrate.

We also almost lost Tom Howery, as he ended up in the emergency room in March with a herniated disk in his neck. After spending a considerable amount of time off work and not doing anything physical, Tommy has made it back to work and bowling, with our fingers crossed that he will hold up in Vegas as well as he did at State a couple of weekends ago, where he led our group in team.

The good news for our group is that we were able to fill our holes with some great additions: Scott Baker, father of team 1 member Broc Baker and a PBA50 member, and Doug Buehrer and Larry Stepp, long-time close friends and multi-time PBA Regional champions from years ago when we spent so many weekends competing on the lanes and partying off.

When it became clear we might lose Shady, I reached out to a few touring pros, but they were either already bowling or unable to make it on such short notice. We also seriously considered an Eagle winner who is not bowling this year.

But we ultimately decided on a simple move that will enable that Eagle winner to possibly bowl later in the tournament with Shady, Richter, Richter’s son Crosby and whoever else they can get. That would give them a chance to get their year in, maybe make a run at some Eagles, and give Crosby some experience before he possibly joins our group next year.

Our new player is Doug’s wife Brandi, a solid 200-plus average bowler who I know will fit in great with our group.

This is going to be a weird Open Championships for us, with sadness overhanging it. But with the great friendships we have, we will make the best of it.

On the lanes, the high scores this year and lane play we have seen in USBC highlight videos make it clear that you can play things straightforward: start to the right with some surface, ball down and stay right or chase it in, let the lanes be your guide, and strike as much as you can.

I brought just six balls (no shipping), with no short pins or control drillings.

We’re again part of Don Amorosi’s large squad, which also was Lenny Frost’s squad before his death last summer. It’s great to see Don continuing on and our four teams will be staying with him next year and beyond.

Needless to say, our focus is on next year when I’ll have turned 60 and we can put our Eagle-winning team (McDowell, Richter, Richgels, Myers, Shady) back together for the first time since 2016. (Assuming there are no more rules changes that would keep us from reuniting. The applicable rules for 2023 are attached to the bottom of this story from this PDF.)

Obviously, it would be a giant thrill to recapture some old magic and make another run at an Eagle – winning would give me an Eagle in five different decades, which I believe would be a record. (Steve Fehr has won USBC titles in five decades counting his 1994 Masters title.)

Our second team for next year is somewhat up in the air, with Howery, Faulkner and Wittkowske are looking to bowl with the Wittkowske family teams.

Goepfert will be part of it as he was for years. The Bakers want to stay with us. We’re hoping Wally can return. And Crosby Richter might be a fit.

But much of this TBD, and we might end up asking Doug and Larry to bowl again.

Obviously, the older you get, the less certainty there can be year to year.

We went from 1998-2009 with the same 10 guys, then made one change and continued with that group until USBC “enhancements” (ha!) made it so Shades, Mac and I had to be on separate teams and we expanded to four teams in 2019.

Assuming I can stay above ground and healthy, I’d like to get to 50 years and do it with the most pins, then get to 100,000 pins in the fewest years ever.  Both of those records obviously won’t last, but it would be cool to set them.

Currently, Rick Minier is the only player with more years than me and a higher average, according to USBC records.

I’ve always been a bowling junkie who enjoys things like Open Championships records and lifetime averages, which allow you to see how much higher the scoring pace is now than back in my first decade-plus as urethane and reactive resin were invented.

If I am fortunate enough to set either or both of those records, I’ll look forward to guys like Shades and Matt McNiel breaking them.