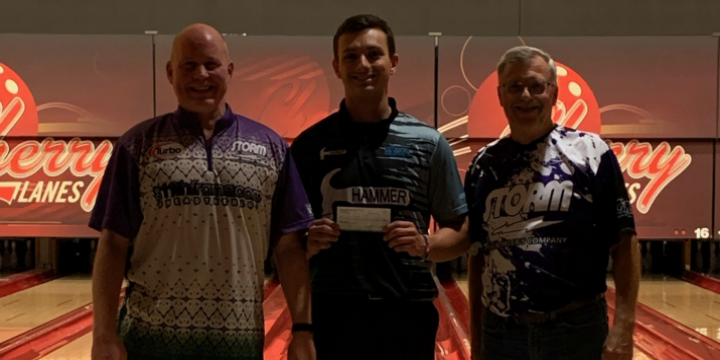 Note: This story originally posted May 5 and has been updated.

Almost everything about the Greater Iowa Bowling Association 11thFrame.com Open will remain the same in 2022, with the tournament set for Aug. 20-22 at Cherry Lanes inside the Diamond Jo Casino in Dubuque, Iowa.

The one exception is the lane pattern: famed pattern designer Nick Hoagland is offering Cherry Lanes director Bob Hochrein some assistance in crafting a shorter pattern than what we have used in recent years, which has been a modification of the 2015 U.S. Open pattern designed by Hoagland for USBC.

I earned Hoagland’s services by making a donation to the Make-A-Wish charity tied to the huge Hoosier Classic college tourney H2M Management runs in Indianapolis, and the plan was to use his services last year, but Hochrein felt he didn't have enough time to thoroughly test the pattern before the tournament.

The 11thFrame.com Open generally has been feast or famine for lefties and it just seemed like trying something different instead of tweaking what we have been using was a better choice.

The challenge is finding something that holds up on the right side for the 12 games on Sunday without having players ending up lofting the left guttercap as happened in 2014. That generally means a pattern that plays from the outside, but it’s very hard to use such a pattern without having lefties dominate. Compensating for that domination can easily shut them out.

We also aim for a challenging pattern with a relatively low scoring pace, which adds to the challenge of crafting the pattern.

I’ll say again something I’ve written and said numerous times: the margin between lefty dominance and shutout, and excessive softness and brutality is smaller now than it ever has been in bowling history. Equity between sides and styles and a middle ground in scoring has never been harder for a lane pattern designer to find.

I think we would gladly would accept a slightly higher scoring pace than preferred if it meant equity left-right and for styles.

The one thing I promise is transparency in what we put out and the reasoning that goes into it – I would not allow my name and brand to be part of any tournament that didn’t offer transparency.

So as soon as we have the pattern set, I will add it to this story. And it will be posted at the tournament before Friday’s sweeper.

The event will remain the same format it has been for years, with a sweeper on Friday night, qualifying on Saturday, and “Flanagan format” semifinals on Sunday, followed by a stepladder finals.

The entry fee again will be $160, with every dollar of entry fees going to the prize fund, thanks to Cherry Lanes donating the lineage again this year.

Hochrein has arranged a group rate deal starting at $90 per night for the Holiday Inn in downtown Dubuque that is about a 5-minute walk from the Diamond Jo. There are just 25 rooms for Friday night and 25 for Saturday night, as there is much going on in the Dubuque area that weekend, Hochrein said. So make your reservations early using the group name 11thFrame Open at 563-556-2000 or 877-666-3243.

Update Aug. 1, 2022: Engelkes said in an email that the Holiday Inn released an additional block of 10 rooms at the $90 rate so if you still need to reserve a room, contact them right away and tell them you want the room rate for the 11thFrame. The rooms are only available until this Wednesday.

The only extra fee entrants must pay is the GIBA $10 season membership fee, and that gets you the right to compete in other GIBA events in 2022-23.

Flyers for the tournament and sweeper are attached to this story as PDFs.

The sweeper starts at 5 p.m. on Friday, Aug. 19, and features a simple format of five games with total pins determining finishing position. The tournament lane pattern will be used.

If you can't make the tournament Saturday and Sunday, you still can enter the sweeper on Friday night.

Saturday’s qualifying again will feature 6-game squads at 9 a.m., 1 p.m. and 5 p.m., with pins carrying over and one-third of the bowlers advancing to Sunday and cashing. With three squads full, there will be a 156-bowler field, 48 players advancing and four more cashing.

As is GIBA policy, bowlers can request to bowl with specific bowlers but lane assignments for pairs will be by random draw.

Sunday’s innovative format that comes from the fertile mind of Mike Flanagan features 12 games of bowling starting at 9 a.m. with bonus pins based on score from highest to lowest. For example, if 48 advance to Sunday in each game the highest scorer will get 48 bonus pins, the second-highest scorer 47 pins, so on down to 1 bonus pin for the lowest score each game. Whatever number of finalists there are, that number of bonus pins will go to the high scorer down to 1 pin for the lowest score each game.

Yes, it’s not head-to-head; instead, it’s all-against-one. The idea is to reward the consistently solid bowler and not the one who may bowl the right people at the right time. And everyone who makes the cut gets to bowl all of Sunday's games.

After those 12 games, the top five will compete in a stepladder finals on fresh oil.

There will be optional prize funds for seniors and women similar to the GIBA Ebonite Classics, along with brackets and pot games. And there will be a SMART option for youth bowlers, as GIBA offers with the Classics.

Seniors and women each are guaranteed a 1-in-3 cashing ratio paying at least $160 per check. For example, if 15 seniors enter and two cash in the regular prize list there would be three separate senior checks so five cash.

There also will be brackets, pot games and a Bet You Win pot.

And a separate $20 entry fee for a separate additional prize fund likely will be offered for both seniors and women — this is not noted on the flyer.

If additional sponsorship is obtained, it will be used to pay extra spots, senior and/or female checks, or improve the overall prize list.

I won't be competing this year as I've pretty much retired from trying to compete in high level events like this against great young players. In addition, I am competing in the PBA50 Tour and PBA60 events in Jackson, Michigan the prior Saturday through Thursday and my wrist will be needing a break.

My 11thFrame.com sponsorship of $400 again will lead to 10 $40 free slot play cards for non-cashers only.

As soon as the final standings are determined, we will draw 10 numbers representing all the non-cashing positions. If there are ties in the standings, the higher position goes to the player with the higher game. The bowlers who finished in those positions will get the free slot play — if they have a Diamond Jo player’s card and are present when their names are called. If a winner is under 21, I will take the free slot play and pay the youth $40 out of my pocket.

This encourages people to get Diamond Jo player’s cards, stick around or return if they bowl early, and gives something back to non-cashers that they might be able to turn into some significant money as if they made the cut. That happened in 2017 when one of the non-cashers who won the free slot play won a jackpot of several hundred dollars.

All we ask of competitors and fans is to patronize the sponsors who help make this such a great tournament: eat and gamble at Cherry Lanes and the Diamond Jo, stay overnight in Dubuque, and patronize Storm Products and IAMBowling if you can. And, yes, please subscribe to 11thFrame.com!

If you do gamble, please get a player’s card and use it! This is VERY important to continue the tournament and sponsorship! (The Diamond Jo is part of Boyd Gaming, so whenever you are in a city with a choice in gambling facilities and one is a Boyd property, you could patronize the Boyd property and let them know why.)

And please thank Hochrein and everyone else at the center and the Diamond Jo. Hochrein is a USBC Open Championships Eagle winner and PBA regional title holder who cares about the sport and manages a top notch staff.

As usual, Engelkes and his family are taking no expense fee for running the tournament, which again will be a points tournament in GIBA’s schedule for 2022-23. All the Engelkes ever do is take a portion of the bracket proceeds while donating the rest back to the prize funds.

Joe is one of the top tournament operators I know and I couldn’t think of a better guy and group to run the 11thframe.com Open.

Nate Stubler edged Tom Hess to win the 2021 GIBA 11thFrame.com Open and join Matt McNiel as a 2-time champion, as I detailed in this story. 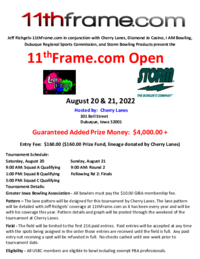