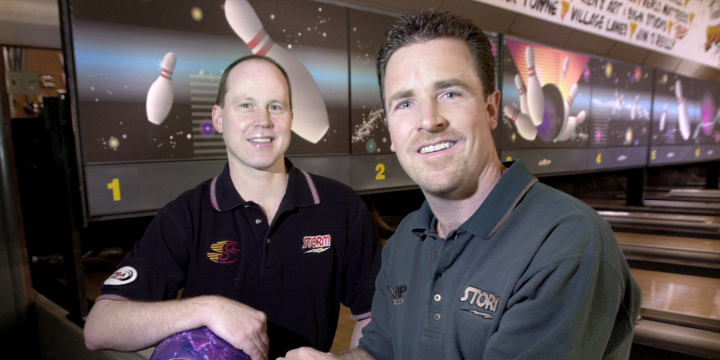 Jeff Richgels and Marc McDowell at Village Lanes in 2003. (Marc is now on MOTIV staff.) Photo from Capital Newspapers archives.

It seems almost certain that a small, but important slice of bowling history would not have happened if Village Lanes of Monona had not existed.

Without Village, it’s almost certain that the bowling careers of both Marc McDowell and myself would not have happened as they did, if at all, as we met and grew up together spending countless hours at the center, which was walking distance from our childhood homes.

Marc was 1992 BWAA Bowler of the Year, 1986 PBA Rookie of the Year, and a PBA President, while I am in the USBC Hall of Fame with five USBC Eagles (two won with McDowell) and two gold medals for Team USA.

In addition, without my bowling career, I would have had no bowling writing career, perhaps no journalism career, and this website would not exist.

Marc agreed with my reasoning in a text exchange: "Friendships, life passions, careers, all of it would have been a totally different story for you and me."

So you can imagine how my head was spinning when co-owner Kevin Carey and manager Mary Conklin called me Wednesday morning to tell me Village would be closing next month. I am not ashamed in the least to say I had tears in my eyes a few times today thinking about Village being gone.

Village’s closing is not a total surprise, of course, as these are tough times for the bowling industry amid the COVID-19 pandemic.

And it was just back in 2016 that the ownership group of Kevin and Lynn Carey and Laurie Slinde had closed Badger Bowl, which became a luxury car dealership, as I detailed in this story.

The hope was that the move of many of Badger’s leagues to Village would help keep the 24-lane center going.

But SARS-CoV-2 proved to be a death blow, as it has for so many centers across the country, especially in areas with strict pandemic restrictions like Dane County.

“Obviously it’s the pandemic,” Carey said when asked why the center was closing. “And we’d have to do some major improvements and the cash flow just isn’t there. Starting with the parking lot, which would cost a bunch.”

There is a deal “in the works” to sell the property at 208 Owen Road in Monona, but nothing can be announced yet, Carey said, adding that “the bowling center will be no longer” once the deal is completed.

That should surprise no one as there are many businesses that produce far more revenue per square foot than bowling. Condos or perhaps more senior living would fit with the area around Village.

The ownership group has owned Village for 36 years.

When I told Carey it was emotional news for me, he replied, “you and me both.”

The last day is set for May 15, with a final gathering in the works.

“It might be Thursday, May 13,” Village manager Mary Conklin said. “We don’t have all the plans set yet.”

Unfortunately, Marc and I will be in Las Vegas that week competing in the USBC Open Championships May 14-15 with our 11thFrame.com group. We will have to stop by one last time before heading to Vegas, and then toast the center while in Vegas.

The cool thing is that the last day Marc and I will have bowled at Village was last Saturday in the Madison Area USBC City (not a) Tournament in which we fired 1,529 on lanes 15-16 to take the doubles lead with one week to go.

That sounds like a plan, and it would go nicely with the head portion of lane 7 or 8 (we’re not sure which it was) that I bought when Village converted to synthetic lanes using the synthetics from Badger Bowl. The plan is that eventually will become a bar top if I ever finish the basement in my home.

If memory serves me right, I first bowled at Village in a summer bantam league after fifth grade with friends from Glendale Elementary School. That was in the Madison School District, while Marc was a Monona resident, so I had not met him until that bantam league at Village.

But it wasn’t long before Marc and I were on the same famed "No Names" youth team with Marks, Lanzendorf and Offerdahl, as a life-long friendship was born. (Note: I had Herro on the No Names instead of Offerdahl in this story originally — memories can be faulty after 45 years!)

On Saturdays, Mac and I bowled junior leagues in the morning, then practiced if there were open lanes, then went into the bar to watch the PBA Tour while Marc’s dad Larry bartended, then headed back out to practice more.

While Marc became a star athlete at MG during high school, I quit golf after my sophomore year at Madison La Follette to focus on bowling, went to men’s leagues just shy of my 16th birthday in July 1978, and worked and bowled almost every day at Village until going to UW-Madison. I won my first significant adult tournament at Village in October 1978 when I was 16, beating many of Wisconsin's greats as I took advantage of my knowledge of every board at the center.

Village was a 12-lane center when I first bowled there, became 20 during my early years, and 24 when the area that contained Jim's Pro Shop, where I learned those skills, became lanes 13-16 when Madison Area USBC Hall of Famer Jim Fladen retired in the early 1980s.

During my freshman year at UW in 1980, I got a chance to write a bowling column for The Capital Times, and that led to my journalism career.

After losing out on the placekicking job for the Wisconsin Badgers as a freshman, Marc transferred to UW-La Crosse to bowl, and then to West Texas State as he became a college bowling star one of the greatest teams of all time that also included Jack Jurek and Mike and Mark Scroggins.

Then he was off to the PBA Tour in 1986, with me following in 1987 before wrist woes and my second and third surgeries ended my Tour career after two years.

Marc retired from the PBA Tour in the mid-1990s, and in 1998 we put together the 2-team group that remains 9/10 together still, having created many historic moments at the USBC Open Championships and boosting myself and Mike Shady into the USBC Hall of Fame … with more to come hopefully.

And none of it would have happened without Village Lanes. 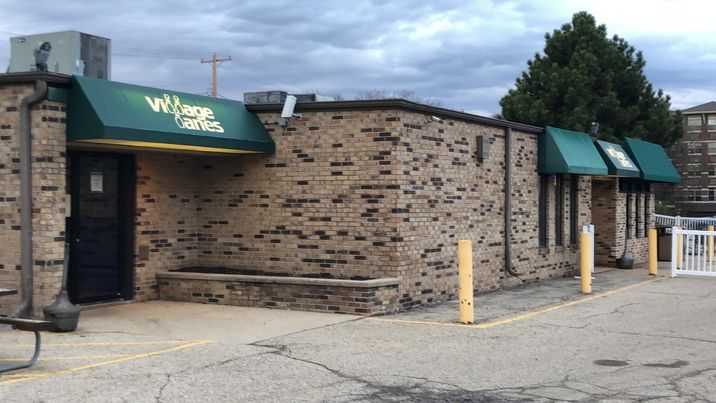