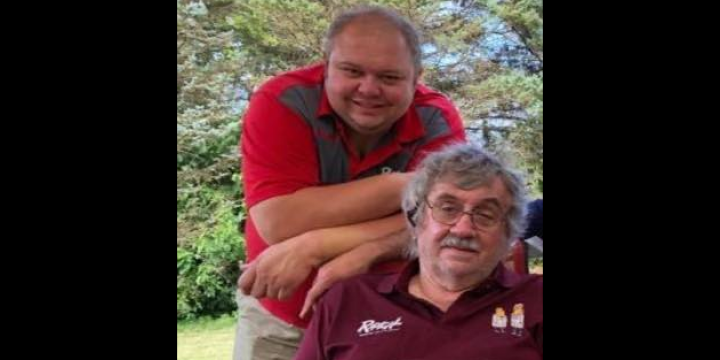 Note: Mo Pinel died earlier this month with COVID-19. This piece is written by Paul Ridenour, as I didn't feel I was close enough to Mo to do him justice, though I had a couple of great conversations with MO over the years. If you have feedback for Paul, you can email [email protected] and I will pass it on. Jeff Richgels.

Maurice Louis Pinel Jr. — or Mo to everyone else — was a chemist, hot rodder, tennis player, spin biscuit, mad genius, volatile, and an all-time debate champion. However, to me he was a mentor and friend.

I met Mo about a month after I started as a Research Engineer at the United States Bowling Congress. My boss, Neil Stremmel, told me that Mo was  coming to our facility to test some new potential bowling balls.

I went to shake his hand, and his hand was completely loose while shaking it. I was thrown off from the beginning. My father, being a southern gentleman after all, taught me the importance of a firm, strong handshake. And here is this genius in the industry limply shaking my hand. I psyched myself out for the next three days, until I realized that he wanted me to think that I had the power in the meeting, when in reality, I had none.

From his days at US Polychem as a researcher and a developer of lane finishes, to probably his most famous work of designing bowling ball cores, Mo's career has touched every part of the bowling industry. During his time at US Polychem, he led the development of the first water-based two-part lane finish. This eliminated the potential of lanes catching the building on fire during the resurfacing process.

The first core he designed was the Track Shark. It was the first ball designed to “flare on purpose instead of accident” as he would say. (Note: The AMF Ultra Angle was the first flaring ball, but not on purpose.)

He also developed the core for the white AMF XS, which was the first mass-produced assymetrical bowling ball. He used to tell a story of how, when developing the Hammer 3D offset, he used the raw clay molds, and changed the cores to fit his vision. The castings were made off of that clay mold.

Later in the MoRich days, he would make 2D drawings on hotel napkins and fold them over to look at different planes to drill them on.

He invented the most scientifically accurate way of laying out a bowling ball — the Dual Angle Method — which is based on Angle Side Angle.

Besides all the bowling inventions that he invented, he was always someone who would listen to whatever I had to say. When I worked for WE Energies, I had an early report time and I would call him on the 45-minute drive into work most mornings. We’d talk about everything from where he was at for the day, how things were going at Radical, situations that I was dealing with, and just general life advice. He was always willing to answer questions and share his knowledge with anyone who asked for it.

He passed away doing what he loved doing, spreading his love and passion for the sport of bowling by visiting all of his friends. He was super excited on this trip to see his son Brian, Chris Hans, drinking the last bottle of 1990 Chateaux Margeux with Del Warren, having a beer with Neil Stremmel, seeing Brian Brazeau and Jace Peterson, and all the pro shops and bowlers he was going to see.

He thoroughly enjoyed meeting up with his friends. When you were with him, you were sitting at the bar unless the bar area was full. You had appetizers or an infamous Mo dinner. His regular drink of choice was a CC and water, tall glass, lots of ice. That was the primary drink, while his fancy drink was a chilled double shot of vodka, with three or four drops of Kahlua just to take the edge off, and three blue cheese olives. He was a man of taste, even though he always said the only two pieces of kitchen equipment he needed were a microwave and a toaster oven.

Like me, he was very specific about all of his tastes, but he lived life to the fullest. I’m going to cherish my memories of him. I’m raising a glass of CC and Coke (sorry can’t take it with just water, need a little sugar to take the edge off of CC) to my friend, Mo.