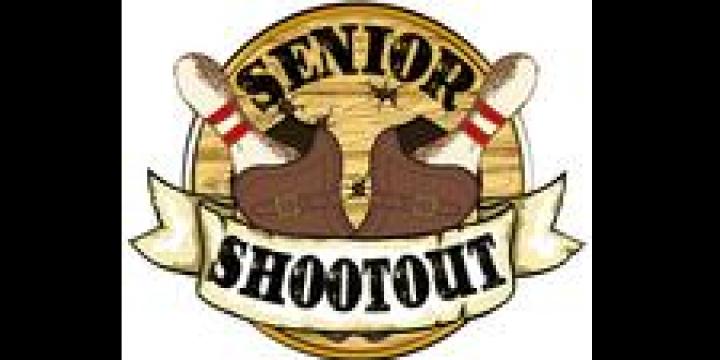 As with any tournament held amid the COVID-19 pandemic, the question was not if the South Point Senior Shootout might adopt any mitigation measures, but what they might be.

The answer came Thursday in this email from tournament director Ron Mohr:

As COVID-19 lingers, we believe it is incumbent on us to develop contingency formats for 2020 South Point Senior Shootout events based on the assumption local and state-mandated social distancing requirements will still be in effect in November.  Listed below are the significant changes likely to be implemented:

As originally planned, with a full field of 180 players all three Challenge Events AND the SPSS Championship will each pay 62 places (top 52 plus 10 Super Seniors).  The Championship also pays an additional four $250 prizes to the top Super Duper Seniors (age 70 and above) that do not otherwise cash in the Championship.  The Senior Shootout web site has been updated to show squad assignments as well as the revised event formats and schedule.

We’d like to extend a special Thank You to Noel Vazquez and Genesis for not only providing squad room supplies (ball cleaner, polish, etc.) but also making their new disinfectant available at no cost to Senior Shootout competitors.  The Senior Shootout staff sincerely hopes the proposed modifications and extended schedule works for all 180 players presently confirmed in the 2020 South Point Senior Shootout.  Please advise if you have a change of plans.

Not mentioned in the email is the always hot topic of masks. Mohr said in a message that currently “masks are required at South Point although we pull them down below the nose on the approach. My best guess is something similar will still be in place” in November.

Of course, predicting the course of the COVID-19 pandemic is difficult beyond the short term, as all of us collectively control its course by our actions.

As I wrote earlier, I entered the tournament the day entries opened last November. My girlfriend Susie and I plan to drive to Vegas for the SPSS.

The South Point Senior Shootout presented by Logo Infusion said in an email that the tournament remains scheduled for Nov. 16-20. The Senior Shootout sold out in January and, with no withdrawals to date, the field remains at 180.

Ron Mohr said in the email that "Ideally by November any virus-related restrictions will have eased and the Senior Shootout can be conducted normally. Over the next few weeks we’ll be in discussions with Mike Monyak, South Point Director of Bowling, to review available options if event modifications are necessary to accommodate COVID-19 limitations."

The South Point Senior Shootout presented by Logo Infusion said in an email that the tournament remains scheduled for Nov. 16-20. The Senior Shootout sold out in January and, with no withdrawals to date, the field remains at 180.

According to the roster posted here, the 2020 South Point Senior Shootout is full with 180 players, and there is a standby list. Last year, many players got in off the standby list, so do sign up if you desire to compete.

Last Tuesday morning when I opened the South Point Senior Shootout website seeking the results from Monday’s Cooks’ Bowling Supply Sweeper to write them up, an entry form for the 2020 SPSS popped up.

Although I get less competitive every year, there is not a better-run tournament outside of the PBA, and it's great for us non-superstar raisins because it bans anyone with three or more PBA Tour and/or PBA50-Tour titles who are age 50 to 62, with no title restrictions for 63 and older.

Most important, it is a week in Las Vegas at South Point Casino Resort and its fabulous Bowling Plaza, renewing friendships with so many great people I see way too little of.

Tournament director Ron Mohr said the 2019 SPSS webcasts enjoyed more than 20,000 hours of viewership in more the 25 countries, and more than 300,00 impressions.

The 2020 SPSS presented by Logo Infusion will be the fifth annual when it is held at South Point Bowling Plaza next Nov. 16-20 (yes, a week later on the calendar than this year).

Mohr said that the formats would remain the same, with changes being considered including increasing the size of the field for the Steve Cook’s Bowling Supply sweeper from 75 to 120, and re-oiling the lanes for the Haynes Bowling Supply Match Play Round. "With the increase from 5 to 6 players per pair during qualifying and no re-oil for the Match Play Round, it became readily apparent the condition breakdown was greater than desired," Mohr said in his email to competitors after the tournament.

The SPSS includes three daily events on separate 35-, 39- and 43-foot lane patterns leading to the SPSS Logo Infusion Championship featuring the 35- and 43-foot patterns. The 2019 patterns are attached to the bottom of this story.

First prize in the daily events is $3,000, and in the Logo Infusion Championship it is $5,000. There are separate $1,000 prize funds for super-duper seniors (70 and older) and women. And there are daily sweepers for additional entry fees.

The final daily event is the Haynes Bowling Supply Challenge. The format is six games on a 43-foot lane pattern. The top 32 qualifiers plus the next eight super seniors advance to match play. Three in 10, plus the top 10 Super Seniors not advancing to match play, cash. Pins carry over and match play is five games with 30 bonus pins for each win and the fifth game being a position round. The top five advance to a stepladder finals.

The SPSS Logo Infusion Championship features the top 32 bowlers as determined by their composite qualifying positions from the three daily Challenge events competing in the SPSS Storm Championship elimination bracket. Seeds 1 through 8 earn two byes; seeds 9 through 16 earn one bye. Seeding position ties will be resolved using the bowler's highest 6-game block from the three Challenge events. The 43-foot pattern will be on the left lanes and the 35-foot pattern will be on the right lanes of each pair.

There also will be optional Super Century doubles (combined age 120 or more) and brackets and side pots each day.

Details on the events and the sweepers are at this page. The schedule is here. The rules are here. The Steve Cook’s Bowling Supply Sweeper on Monday has been expanded to 120 entries. Priority is given to players entered in the 2020 Senior Shootout, but the sweeper is open to all seniors eligible for the Senior Shootout until the sweeper field is full.

You can find my stories on the South Point Senior Shootout through the years here. And attached to the bottom of this story is Mohr's interesting statistical breakdown of entries by age and left- and right-handed and the cashing performance by those groups.

Mohr said this in his post-tournament email to competitors:
Even after more than 35 withdrawals, we enjoyed a full field of 180 players for the Turbo Challenge, and 179 competitors for the Storm and Haynes Bowling Supply tournaments. Sincere gratitude to South Point Director of Bowling Mike Monyak who provided additional support to fully fund the prize list of every event. Over the five days a total of over $180,000 in prizes was awarded, and 127 of 180 players cashed in the Challenge and/or Sweeper events. And for the third consecutive year, we had a different champion in each of the eight events.
Events of this magnitude are not possible without the generous support of our sponsors. In addition to the supporters mentioned above, genuine appreciation to 3G Shoes along with Craig Elliott and BowlStreamTV for event live-streaming, Sun City West, Arizona realtor Lona King for the Ladies’ Supplemental prize fund, to Noel Vazquez and Genesis for outfitting the squad room with the essential supplies, to John Janawicz and Kegel for assistance with the lane patterns resulting in an ideal scoring pace, and to Jeff Richgels’ 11th Frame.com for helping spread the word. Attached please find the 3G Shoes order form with which you may purchase 3G bowling shoes delivered to your door for $150.00 (great Christmas gift idea?!)
Entries are being accepted now for the 2020 Senior Shootout scheduled for November 16-20. The 2019 Senior Shootout sold out in April, and our fingers are crossed hoping for a similar reception for 2020. A mail-in entry form is attached, or players may enter online here. A $400 deposit will hold a spot in the 2020 event with the balance due by October 1st. Fully paid entries submitted by December 31, 2019 earn a $50 discount ($750 instead of $800); beginning January 1, 2020, entry is $800.00. In each case, there is an additional processing fee for entries paid with a credit or debit card. We hope the 2020 South Point Senior Shootout is included in your bowling plans. 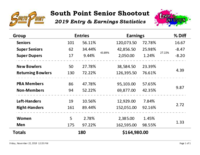 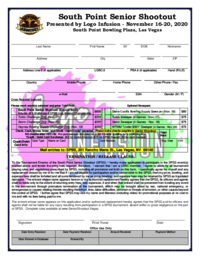